About UsBraum’s Awards Over $45k in Tuition

Blog / In The Community / Braum’s Awards Over $45k in Tuition

Oklahoma City, OK– Braum’s is proud to congratulate all the winners of the Braum’s-Dr Pepper Tuition Giveaway.

The contest ran from October 1st to November 30th, 2016. Contestants had to be at least 18 years of age and reside in Arkansas, Kansas, Missouri, Oklahoma or Texas. All the contestants had to do to be entered was text BRAUMS to 737737 (the code for employees was BRAUMSTEAM).  They could enter once a day. Winners can also gift the prize to someone else if they are at least 17 years of age and plan to attend or are attending a college or post-secondary school.

“This is the third year that we have done this contest and it has really turned into a hit with the customers,” said Drew Braum, President and CEO. “We’re very proud of all the winners and wish them the best of luck in their college career.”

The Dr Pepper tuition award can be used to cover college or post-secondary vocational institutional tuition, fees, books, supplies, equipment, related educational expenses or on-campus room and board. The tuition award can also be used to pay off student loans for eligible costs.

Alford is attending Missouri State University. She is currently a sophomore majoring in animal science with an emphasis on pre-vet.

Katherine said she only entered the contest once when she was out to dinner at a local Braum’s and saw the sign.

Blackdeer is actually paying it forward by gifting the prize to one of her friends that is attending college in San Diego. 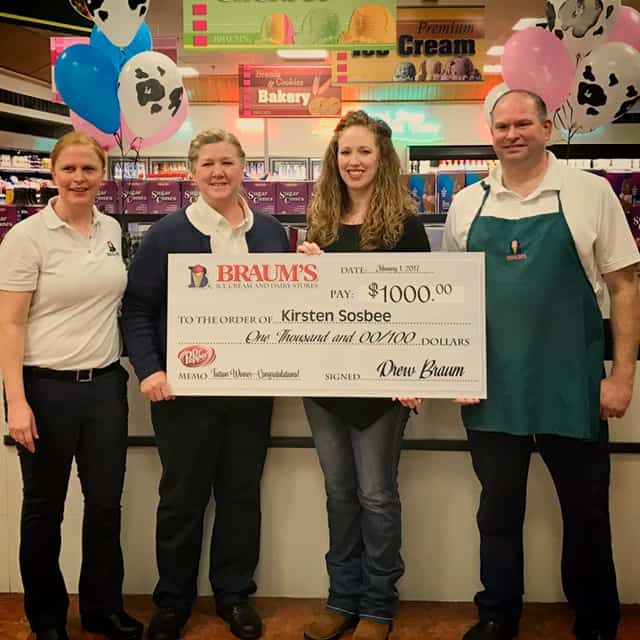 Kristen attends Mid-America Christian University in Oklahoma City. She is in her freshman year majoring in business and accounting.

She plans to put it towards her tuition at Tulsa Community College where she is studying to receive her nursing degree.

“I was surprised when I got the call,” Williams said. “I think I entered about 10 to 15 times while the contest was going on.”

Johnston is actually gifting the prize to her daughter, Candace Johnston. Candace is currently a junior geology major at The University of Oklahoma.

Cindy Taylor was unable to accept the award in person, but her son accepted it in her place since she will be gifting it to him.

Ethan currently attends Moore High School, but plans to go to The University of Oklahoma and major in international business.

Melissa was not in town to receive the check, but her daughter, Katie Day, accepted it on her behalf since her mother plans to gift it to her. Katie is currently a senior at Edmond Memorial High School and plans to use the gift towards her college tuition. 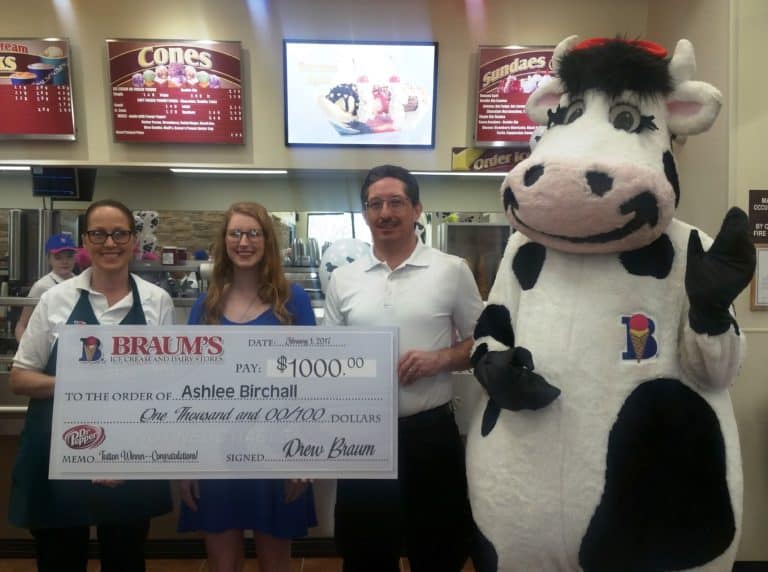 Birchall is a junior at The University of Oklahoma in Norman. She is majoring in Biology. She plans to use the award to help with her tuition costs.

Shane will be using his prize to go towards his tuition costs at The University of Tulsa where he is majoring in electrical engineering.

Employee winners of the $1,000 prizes included:

Tonya graduated from Rose State College in 2010 with an Associate Degree in Science-Business. She has been with the company since 2007 and she is currently the payroll coordinator at the Braum’s Corporate Office in OKC. She may already be graduated, but she says the money will definitely help.

” I am so grateful to the Braum’s family and Dr. Pepper/7-UP company for this opportunity to help pay off student loan,” she said.

London is attending Paul Quinn College in Dallas. He is currently a sophomore and is majoring in Health and Wellness. He has been working for Braum’s since August of 2016.

“Working at Braum’s is more like being part of a family,” London said. “The great Nelson Mandela referred to education as ‘the most powerful weapon which you can use to change the world.’ This award is going to do just that by helping me accomplish my dream of owning multiple food establishments around the world, all while helping the communities around me.”

Linn is an employee in Dallas at the Braum’s located on Preston Road. She is awarding the prize to her daughter who is attending nursing school in the area.