July may be National Ice Cream Month, but at Braum’s –it’s an ice cream celebration every day, and it has been that way for many years. However, centuries ago, Europeans could not have possibly foreseen that Braum’s would make the Black Walnut famous by making it an ice cream flavor! 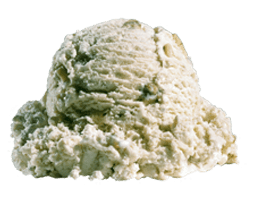 Ice cream is like an art and it all starts at the Braum Family Farm in Tuttle, Oklahoma. Located on the farm is Braum’s Processing Plant, Bakery, Private Dairy Herd and Milking Operation.

The milking operation is touted as one of the largest of its kind in the world, milking 800 cows every 32 minutes. The fresh raw milk is used when making Braum’s Ice Cream and other dairy products.

And speaking of ice cream, Braum’s makes over 100 flavors of ice cream, milk and other dairy products as well as ice cream cones, cookies, breads and much more!

When you make over 100 ice cream flavors you’re going to need plenty of ingredients—like milk, fresh from the Braum’s private dairy herd. It is combined with fresh cream and sweetener. Then they add the “inclusions” like chocolate chips, cookies, caramel, and nuts—For instance, Braum’s Black Walnut ice cream.

Plus, everyone knows that ice cream tastes best sitting atop a freshly baked waffle, sugar, or cake cone. That’s why Braum’s bakes their ice cream cones five days a week at their bakery, also located on the Family Farm in Tuttle. Braum’s special built German ovens can bake 15,000 waffle cones an hour! 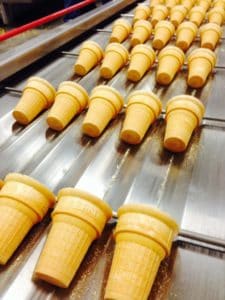 Ever wondered why the cookies in Braum’s Cookies & Cream Ice Cream taste so good? It’s because the cookies are made fresh in Braum’s own bakery. They even roast the pecans and almonds that they use in Braum’s Ice Cream flavors like Banana Pecan and Chocolate Almond.

Making ice cream is second nature to the Braum Family. Their ice cream expertise spans three generations with over seven decades of history behind it. Bill Braum’s father, Henry, owned a chain of retail ice cream stores in Emporia, Kansas, called “Peter Pan Ice Cream Stores”.  Bill Braum starting working for his father as a carhop while still in grade school and the rest, as they say, is history.

For more information about Braum’s, go to the “About Us” section.