About UsYour Braum’s Stories – My First Job at Braum’s!

Blog / Miscellaneous / Your Braum’s Stories – My First Job at Braum’s! 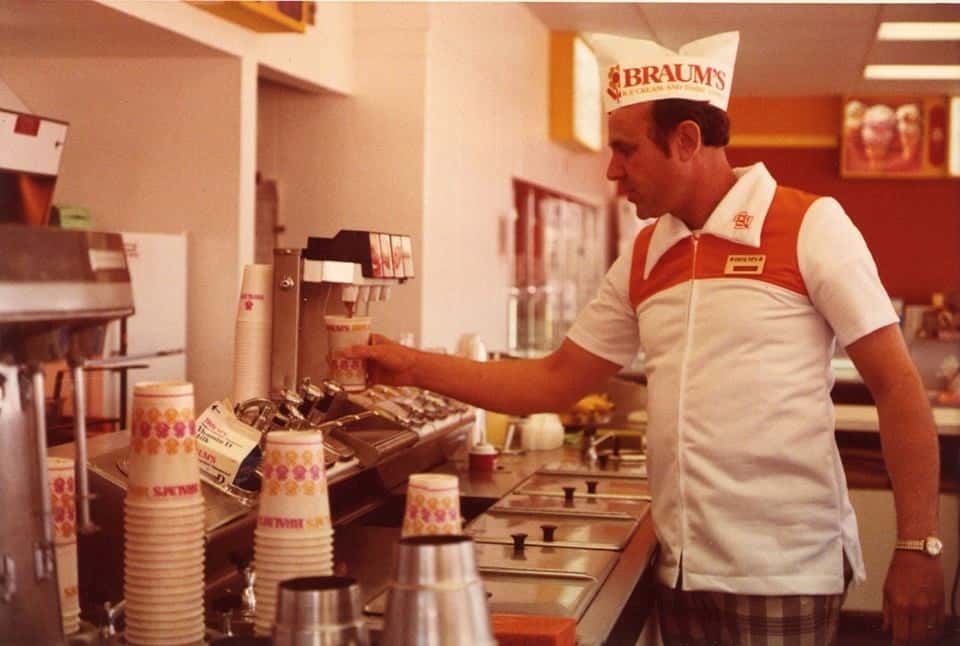 We asked our fans to share first job memories at Braum’s… and they delivered!

Many had fond memories from their crew member years (and some are still working with us)! Reading your stories warmed our hearts–and made us hungry for ice cream. Some of you perfected the preparation of a hot fudge sundae, others had fun interacting with customers over the counter.

One common theme is the friendships formed between team members (and even a few future marriages)! Many credited managers for instilling a strong work ethic and loved their Braum’s experience.

Commemorate good times and hard work with a scoop of your favorite ice cream flavor or enjoy a chicken strip meal for old time’s sake. Thanks for the dedication to our customers!

Here are a few of our favorite first job stories.

“My first job experience, at the Joplin, MO Braum’s, was back in 2014 when I was first hired on… this was my very first job and when I reported in for my first day, I was beyond scared! After orientation I got a lot of hands on experience and at first I was called a turtle because of how slow I moved, and then something clicked and I became a superstar on the cone line and register four… After about a year and a half, I was promoted to night shift supervisor.

Since then, I started doing a lot of the training for the new kids, from how to make single dip cones all the way to running the grill. I have been able to watch them grow as people and not just as my employees! During all this time, I became friends with my co-workers and customers. Some of the customers come in just to have me serve them. I have LOVED every moment that I have worked for Braum’s and I am glad that I am still with them and my future goal with Braum’s is to become a trainer! I will always recommend to friends and relatives to have their kids apply for Braum’s as their first job the same way I did three years ago! Thank you for all the opportunities that you all have given me!” 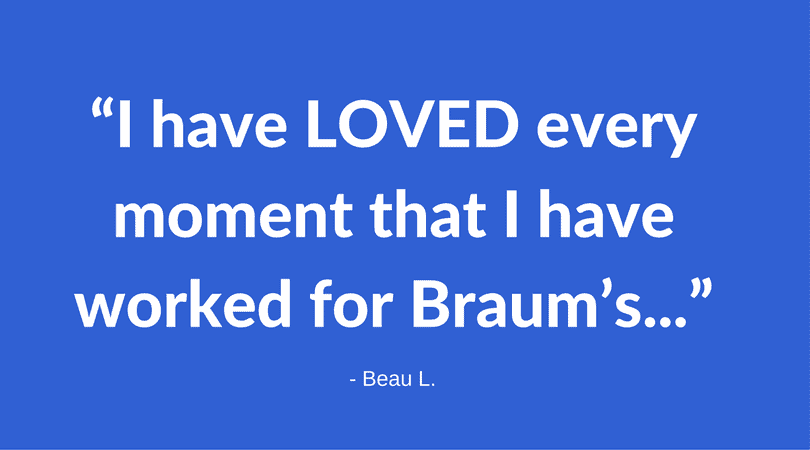 My first job was at Braum’s in Purcell, OK. I was seventeen and a senior in high school. I can still remember how nervous I was in the interview. For the first few months, they had me cleaning in the lobby. After a while, I moved to working the back drive-thru. Within a year, I could work anywhere in the store, but the back drive-thru will always be my favorite spot. I got to know a lot of the regular customers; I really enjoyed getting to know them, and their orders!

My general manager was always so understanding and worked around my school schedule. I worked there all the way through college and even got a scholarship from Braum’s to help with a part of my tuition. Now as a teacher, I credit my manager with instilling such a good work ethic in me. I could probably call her even now for a job!”

“I was only looking for a part time job when I was 16 and still in high school. I just wanted a little bit of spending money and it eventually turned into a career. I went full-time after I finished high school.

By the time I turned 21, I became a shift manager and I have been a shift manager for three years. I’ve been at Braum’s for seven years and I love it. You get paid decently and get to meet really cool customers that turn into our regular customers. I’m always happy to see their faces when they come in that door.”

“I met my husband by working at Braum’s! I started working there the summer before my senior year in high school and he had been working there for a year or so. Five years later we got married! 12 years and three kids later and we still love Braum’s!

“I got my first job at Braum’s in 2008 when I was just 14. It was supposed to be just a summer job, but little did I know that a summer job would turn into a five-year job! It taught me a lot about the working world and I’m forever grateful for the experience.

I miss my regular customers a lot. There was a man that came in every Sunday just so I could make him a Butterfinger mix. My other favorites to make were cherry limeades and ice cream sodas. I still make sodas at home to this day!”

Submitted by Lauren A.

“My first job was at Braum’s, it started over two years ago on May 15, 2015, the day after I turned 16. It was in Chickasha, Oklahoma. It was the BEST first job ever. All my managers were amazing…

My best memory of working at Braum’s was probably when we got a 100% on one of the BOGO Tuesdays when another store challenged us. We were all so helpful of each other and I had a blast.”