OKLAHOMA CITY, OK—Three lucky Braum’s customers are enjoying new gadgets this week after winning grand prizes during the grand re-opening of the store located at 11224 N. May.

The store was recently closed for about a week. When it reopened its doors earlier this month, customers were given the chance to win  a FREE HD TV, gaming console, laptop computer, as well as free Braum’s food and merchandise.

The winner of the 50″ 4K HD TV was Larry Cranmer, although his granddaughter accepted the prize in person during his absence.

The winner of the Lenovo laptop was Kay Davis.

The winner of the PS4 was Robert Seward. 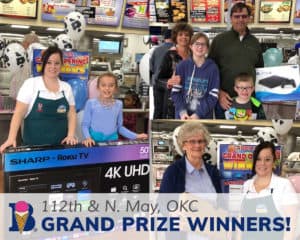 The re-opening of this location brings the total Braum’s stores in operation to 279. All stores are located in a five-state area: Oklahoma, Texas, Kansas, Missouri and Arkansas.

Braum’s features an old-fashioned ice cream fountain along with a grill area for breakfast, lunch and dinner. This new store also has a large Fresh Market area with more than 100 fresh meats, fruits, vegetables and fresh-from-the-farm dairy products.

Bill and Mary Braum opened their first Braum’s store in 1968. The company is still family owned and operated. In Oklahoma alone, there are 128 stores. For more information about Braum’s, go to www.braums.com.